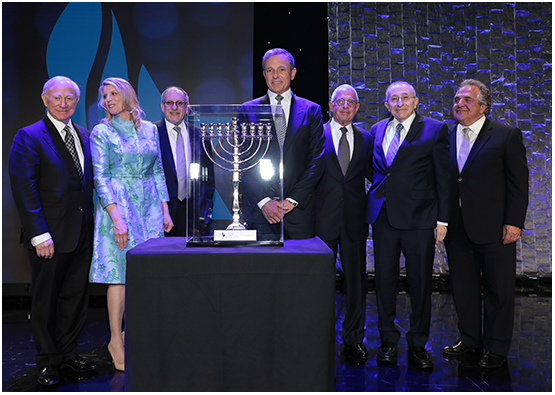 “In the last few years, we have been harshly reminded that hate takes many forms, sometimes disguising itself as more socially acceptable expression like fear or resentment or contempt. It is consuming our public discourse and shaping our county and culture into something that is wholly unrecognizable to those of us who still believe in civility, human rights and basic decency.” Mr. Iger said. L-R: SWC Board of Trustees Chairman, Larry Mizel, SWC Board of Trustees Co-Chairman/Chairman of the MOTJ Capital Campaign, Dawn Arnall, SWC Executive Director, Rabbi Meyer H. May, Mr. Iger, Vice Chairman of NBCUniversal, Ron Meyer, SWC Founder and Dean, Rabbi Marvin Hier and SWC Board of Trustees member and Chairman and Chief Executive Officer of Paramount Pictures, Jim Gianopulos 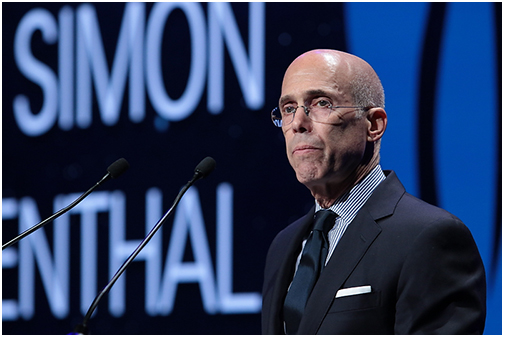 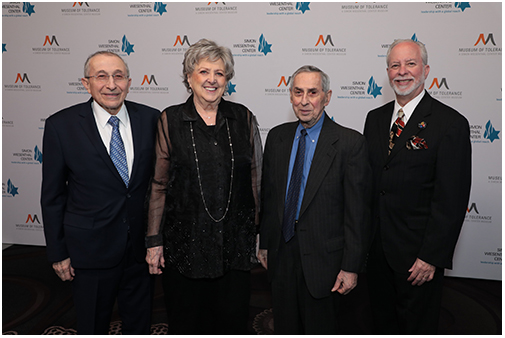 Medals of Valor were given out to those who exemplify the good deeds of outstanding individuals who honor mankind and whose courage and bravery shine a light in the darkest of places. Rabbi Jeffrey Myers of Pittsburgh’s Tree of Life Synagogue received such medal for his community service and his actions during and after the October 27, 2018 Tree of Life synagogue massacre. Rabbi Myers’ medal had the inscription, “He who saves a single life, it is as if he has saved an entire world.” Other recipients were Holocaust resistance hero, Kurt Kleinman; and immigrant rights activist, Florence Phillips. L-R: Rabbi Hier, Florence Phillips, Kurt Kleinman and Rabbi Myers. 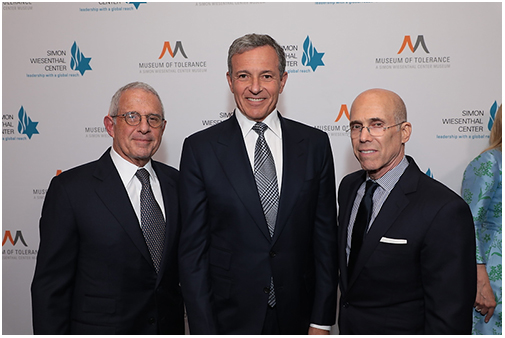 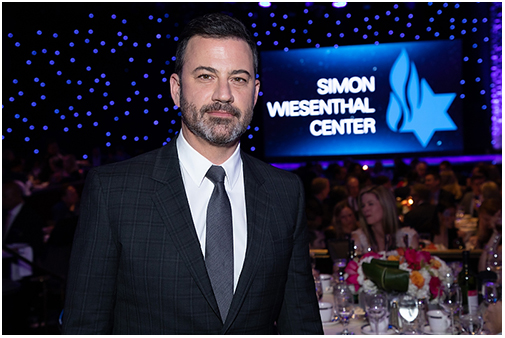 Jimmy Kimmel served as the evening’s Master of Ceremonies.

Rabbi Marvin Hier, Founder & Dean of the Simon Wiesenthal Center and Museum of Tolerance closed the evening with an important message, “To restore hope and confidence in our future, Americans should heed the advice of the great 12th century thinker, Maimonides, who taught that one must never allow extremism on either side of the pendulum to become our permanent abode.  Human beings, he insisted, should learn to oscillate between the extremes.  Sometimes veering more to the East and other times more to the West, with the sole objective always being the greater good of the community. Recognizing that politics in the absence of patriotism will almost always lead to tyranny!”

The Simon Wiesenthal Center is a global human rights organization researching the Holocaust and hate in a historic and contemporary context. The Center confronts anti-Semitism, hate and terrorism, promotes human rights and dignity, stands with Israel, defends the safety of Jews worldwide, and teaches the lessons of the Holocaust for future generations. With a constituency of over 400,000 households in the United States, it is accredited as an NGO at international organizations including the United Nations, UNESCO, OSCE, Organization of American States (OAS), the Latin American Parliament (PARLATINO) and the Council of Europe.

The Center’s educational arm, founded in 1993 challenges visitors to confront bigotry and racism, and to understand the Holocaust in both historic and contemporary contexts. The Museum has served over 7 million visitors with 350,000 visiting annually including 150,000 students. Over 1.5 million children and youth have participated in the Museum experience and its programs. Over 200,000 adults have been trained in the Museum’s customized, professional development programs which include Tools for Tolerance®, Teaching Steps to Tolerance, Task Force Against Hate, National Institute Against Hate Crimes, Tools for Tolerance for Teens, Bridging the Gap and Space to Talk About Race.