"The Hamas connection: viewed as an ally of the extreme left, is now revealed in the Nazi camp."

PARIS - On 13 February, the Wiesenthal Centre noted the march of a Fascist tribute to Franco’s Blue Division, sent to Hitler to fight in Russia. A young woman took the podium on that occasion to claim it as her “absolute obligation to fight for Spain, to fight for Europe, which is now weak and has been sold off by the enemy. Only the disguise will differ, the enemy will always be the same, the Jew... The Jews are to blame and the Blue Division fought for this.” - A hate show slammed by the Wiesenthal Centre’s Director for International Relations, Dr. Shimon Samuels. 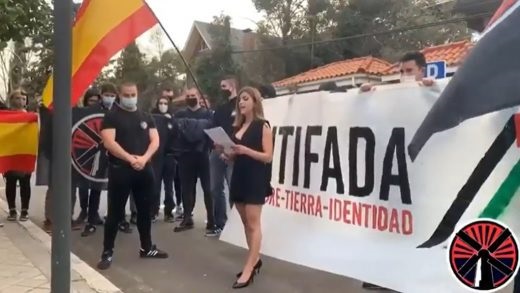 The 18-year-old Isabel Peralta has since received a ten-month scholarship in Dusseldorf “to learn techniques for propaganda and combat.”

The host is the German neo-Nazi group, “Der III Weg” (the Third Way). Since Peralta’s arrival, the group has organized “citizen patrols” to intimidate political refugees in Brandenburg. The group has published its actions: “Well equipped, our activists walk through frontier regions to find illegals. This time we will not sit with our arms crossed, while millions of foreigners arrive in our country.”

The young Fascist was a student in the Complutense University of Madrid, where she was politically active with the Spanish neo-Nazi group “Bastion Frontal.” She is the daughter of a PP (Partido Popular, centre right) activist, who reportedly disproves of her activities.

“She made her name at the February march with her antisemitic comments. For those statements, the Madrid police was about to charge her with hate speech,” noted Samuels.

Now in Germany, she will face a problem with her 'scholarship'. Her donors hate Muslim refugees in particular. Isabel is a great supporter of Hamas and waves banners calling for a “3rd Intifada.” Most interesting is this Hamas connection. Viewed as an ally of the extreme left, it is now revealed to be in the Nazi camp.

Rather than the student, Peralta may become the teacher that the enemy of my enemy is my friend - “Palestine.”

“Watch out for Isabel! The danger is that this Nazi 'Scholarship' programme may go viral,” concluded Samuels.