Rabbi Marvin Hier is the founder, CEO and president of the Simon Wiesenthal Center (SWC) and its Museum of Tolerance (MOT). He founded the Museum of Tolerance Jerusalem (MOTJ) in 1993 - now in its final stages of construction in Jerusalem. In this capacity, Rabbi Hier and his senior team 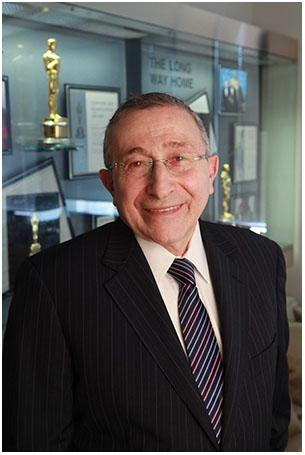 have raised hundreds of millions of dollars for the institutions he now supervises and directs.

Rabbi Hier is the visionary who directs the strategic planning for both corporate entities. He founded Moriah Films, the Center’s film division in 1980, of which he is the executive producer and is the only Rabbi that is a member of the Academy of Motion Pictures Arts and Sciences and the recipient of two Academy Awards®. His personal relationship with many of Hollywood’s leading studio heads has resulted in 40 years of National Tribute Dinners which have raised hundreds of millions of dollars for the SWC.

Rabbi Hier was the first Orthodox rabbi in American history to be invited to deliver an invocation of a Presidential inauguration, and the first American to be chosen by the government of Israel to light the Torch of Remembrance on Israel’s Independence Day. He is also a recipient of two honorary Ph.D’s.

As founder, Rabbi Hier is an ex-officio, non-voting member of the Board and all Board Committees of SWC Inc. and SWC Museum Corporation. Since its creation in 1977, Rabbi Hier has directed and implemented, together with senior colleagues, all the goals, policies, and programs, including the worldwide social action activities of the SWC. Rabbi Hier was recently invited to join The Genesis Prize Foundation (GPF) Advisory Board. The Genesis Prize, which is often referred to as the Jewish Nobel, annually awards $1 million to Jewish people who have attained recognition and excellence in their fields.

Like the Center's offices around the world in Canada, Buenos Aires, Paris and Israel, when the MOTJ opens its doors, it too will be an affiliate of the Simon Wiesenthal Center Inc., Los Angeles, the international headquarters of the organization. Aside from the day-to-day operations of the MOTJ, any decisions that have global significance will be made by Rabbi Hier and the senior staff of the SWC LA, the organization that created the MOTJ.

In this capacity, as the Center’s founder, president and ex-officio non-voting member of SWC Inc. and SWC Museum Corp., Rabbi Hier, in consultation with senior SWC staff, shall make all the final decisions on the content and selection of production companies charged with the fabrication and architectural look of all exhibits, audio-visual equipment, films, scripts and interactive material, for both for the MOT Los Angeles as well as the MOTJ in Israel.