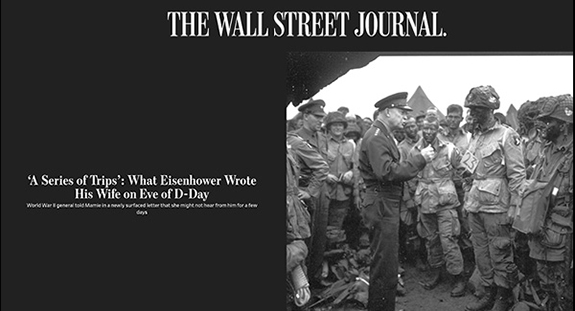 A Series of Trips': What Eisenhower Wrote His Wife on Eve of D-Day

The day before he launched the greatest amphibious landing in the history of war, Gen. Dwight Eisenhower paused to tell his wife not to take it personally if he didn’t write her for a few days.

Ike’s little-known letter to Mamie reveals the supreme Allied commander juggling martial and marital duties at the moment he ordered 155,000 troops to storm the Normandy beaches, which started the liberation of western Europe from the Nazi Germans.

“Starting tomorrow,” Gen. Eisenhower wrote on June 5, 1944, “I have a series of trips that will last without interruption from six to ten days.”

“So if you have a lapse in arriving letters, don’t jump at the conclusion that I don’t want to write—I’ll simply have no opportunity to pick up a pen,” Gen. Eisenhower assured his wife. 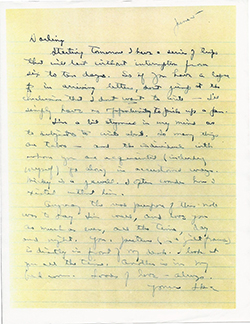 He kept the handwritten letter vague, apparently to avoid giving away war plans should it fall into German hands. He may even have mentioned his “series of trips” in an effort to persuade the enemy that the landing was still a week or more off.

“I’m a bit stymied in my mind as to subjects to write about,” he confessed to Mrs. Eisenhower. “So many things are taboo.”

The Simon Wiesenthal Center and Museum of Tolerance purchased the letter, which had been in the possession of the Eisenhowers’ son, the late John S.D. Eisenhower. John Eisenhower left it out of his 1978 collection of his father’s correspondence, “Letters to Mamie.” The Wiesenthal Center of Los Angeles, an international human-rights organization, plans to put the letter on display for the first time for this week’s 75th anniversary of the D-Day landings.

Photo: Eisenhower's letter to his wife (click on image to enlarge)

The Wiesenthal Center collects key documents related to the Holocaust, including letters from Winston Churchill and Albert Einstein, and a 1919 letter in which Adolf Hitler urged “the uncompromising removal of the Jews altogether.”

“Here we are 75 years later, and there’s not one country I can think that’s not battling with the return of bigotry and anti-Semitism,” said the center’s founder and dean, Rabbi Marvin Hier.

Allied commanders spent the week leading up to the invasion monitoring English Channel weather forecasts and trying to pick the best day for the crossing. On June 1, they began twice-daily meetings—around 4:30 a.m. and 9 p.m.—to discuss when to launch the attack, according to Tim Rives, supervisory archivist at the Dwight D. Eisenhower Presidential Library and Museum in Abilene, Kan. 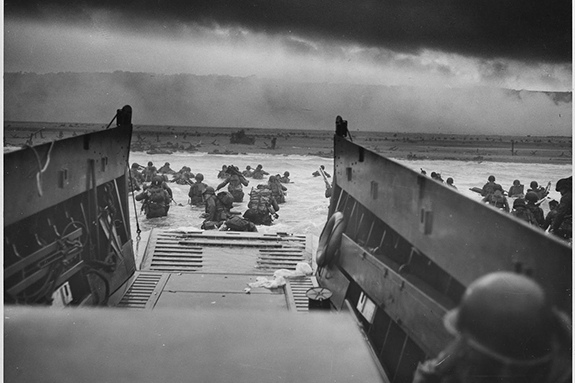 Most of the meetings took place at Gen. Eisenhower’s forward command post at Southwick House in Portsmouth, England.

Allied leaders, including Mr. Churchill and President Franklin Roosevelt, gave Gen. Eisenhower authority to make the call. On June 4, he ordered the invasion to begin the following day. Foul weather over the Channel forced him to cancel the order.

Early on June 5, Gen. Eisenhower again met with his ground, air and naval commanders. Group Capt. James Stagg, a Royal Air Force meteorologist, predicted a narrow window of decent weather for June 6, with tamer waves and wind in the Channel.

Senior commanders spoke in favor of going ahead with the invasion. Gen. Eisenhower paced the room at length and finally said, “O.K.—we’ll go,” setting in motion an attack that had been in the works for more than a year.

Later that day, the general visited paratroopers from the 101st Airborne, who would jump into France ahead of the landing. A photographer snapped the iconic image of Gen. Eisenhower talking to the men, their faces darkened with camouflage paint and the gravity of the task they faced.

The general’s family later told Mr. Rives that Gen. Eisenhower always kept a copy of that photo in his study.

That night he scribbled a message to be issued in case the Germans repelled the landings and forced him to withdraw Allied forces. “The troops, the air and the Navy did all that Bravery and devotion to duty could do,” the statement said. “If any blame or fault attaches to the attempt, it is mine alone.”

He put the note in his wallet. After the invasion’s success, his Naval aide saved it in his own diary.

Gen. Eisenhower wrote to his wife at least weekly, according to Mr. Rives. (For decades, rumors have persisted that Gen. Eisenhower had a wartime love affair with his driver, Capt. Kay Summersby. Mr. Rives says no documentary evidence has ever proven that such a liaison occurred. The future president’s son John once said, “There are only two people who know the truth, and they’re both dead.”)

Early in the war, Gen. Eisenhower dictated his letters to his wife. Mrs. Eisenhower objected to the impersonal touch, prompting the general to hand-write subsequent letters, such as the one he sent on June 5.

After a bit of small talk about his staff, he wrote “the real purpose of this note was to say I’m well, and love you as much as ever, all the time, day and night.” Gen. Eisenhower reported to his wife that he kept her photo on his desk and in his bedroom.

“Somewhere in those crowded hours,” Mr. Rives said, “he managed to get a few lines off to Mamie.”