Past Events: SWC Southern US 2012 “Spirit Of Courage” Benefit

The Southern Region 2012 “Spirit of Courage” Benefit featured a blue-ribbon panel of political and security experts who debated, Arab Spring or Arab Winter: Is there a possibility for peace in the Middle East. The event was moderated by Miami’s own Michael Putney of WPLG Local 10. Participants included Council on Foreign Relations senior fellow Elliott Abrams and former deputy National Security Adviser to two U.S. Presidents; Princeton University professor Daniel Kurtzer, U.S. Ambassador to Israel from 2001-2005 and then Egypt from 1997-2001; and Wall Street Journal editor and principal foreign affairs columnist Bret Stephens. Hosting the event was Mariita and George Feldenkreis; Ronalee and Russell Galbut; and Tati and Ezra Katz.

“With the dramatic recent events in the Middle East, a looming and critical presidential election in the U.S. just months away, and serious concern over the safety and security of Israel, we felt it was more important to make the event an opportunity for learning and dialogue, said co-chair Ezra Katz.”

“We could not have picked a better or more balanced group of analysts, observers, and experts to lend their insight to our organization,” said Rabbi Meyer H. May, executive director of the SWC. “Messrs. Abrams, Kurtzer, and Stephens delivered strong, passionate, and intelligent viewpoints, representing a diversity of attitudes across the political spectrum.” 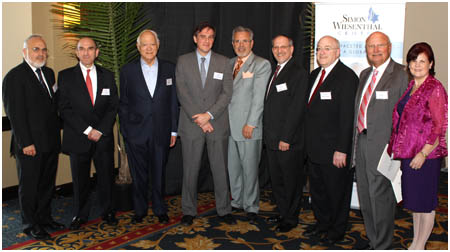