PARIS -  Our 2021 “Worst Offender Awardee” goes to Syria and "Runner-Up" to Qatar for recidivist antisemitic conspiracy theory titles in their catalogues...

The Simon Wiesenthal Centre is, for the 19th year, the only non-governmental organization to monitor texts of hate and violence on the stands of problematic publishers at the Frankfurt Buchmesse (FBM) - “The Olympics of Book Fairs”.

A hybrid Fair this year due to the Pandemic, almost 2,000 publishers, including electronic participation represented some 70 countries, bent on sales contracts.

The Centre's Director for International Relations, Dr. Shimon Samuels announced at the Book Fair's closure that, "Our 2021 'Worst Offender Awardee' goes to Syria and 'Runner-Up' to Qatar for recidivist antisemitic conspiracy theory titles in their catalogues."

Syria is represented by its own stand, but also through Qatar and Egypt. 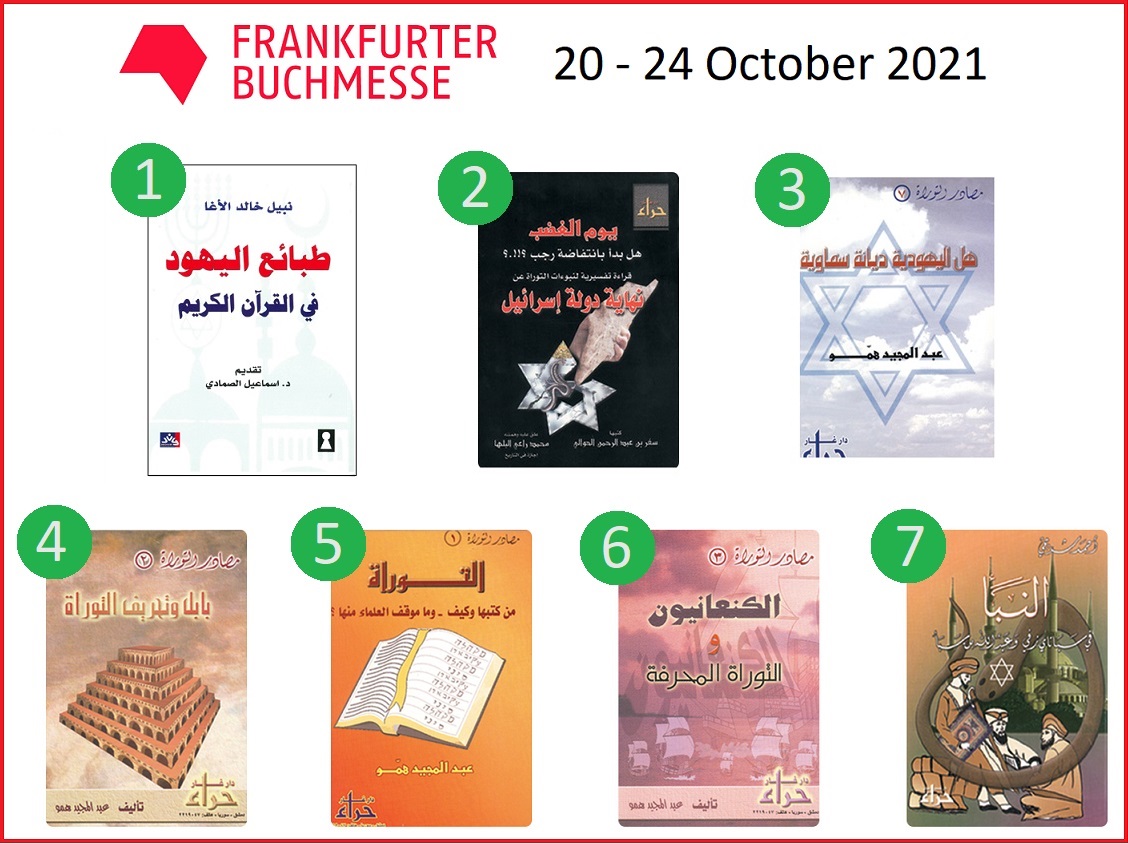 1 - The Nature of Jews in the Quran, by Nabil Khalid El Agha

A detailed synopsis of the book from Qatar's Al-Watan newspaper
https://www.al-watan.com/news-details/id/50368 Doha-Al-Watan

Writer Nabil Khaled Al-Agha says that the Jews conspired with the forces of arrogance. and his message in his book “Nature of the Jews in the Noble Qur’an,” published by Darnoor Houran Damascus and Dar Al-Ulum, he sees that studying Jewish nature through the Holy Qur’an is a necessity for us, Arabs and Muslims.

The book includes five chapters in which the author reviews definitions, the behavior of the Jews through Surat Yusuf and why the Jews plot against Islam and Muslims, and the Qur’an refutation of the allegations of the Jews, and their questioning of the prophecy of the Prophet Muhammad “peace be upon him,” and why God was angry with the Jews and expelled them from His mercy.

He states that the Zionist: is one who believes in the Zionist belief “either in its settlement form or away from its settlement form.” Therefore, there is a deep difference between the Zionist and the Jew, and between them on the one hand and the Israeli on the other, as the most famous researcher Abdel Wahab Al-Masiri says in the Encyclopedia of Jews, Judaism, and Zionism. “The Israeli is a citizen of the Zionist state, and he is different from the “Israeli” or a member of the “Israel Group” who are the Hebrews as a religious group, and not all Israelis are Zionists, just as all Zionists are not necessarily Israelis, and there is no synonym between “Israeli” and “Jewish” » In fact, there are many Israelis who reject the Jewish faith, says El-Messiri.

The writer says, “Judaism” is the oldest of the monotheistic religions, and the Jews firmly believe in the oneness of God, and it was mentioned in the Book of Deuteronomy: “Hear, O Israel, that the Lord our God is one.” Judaism is the religion of Moses, peace and blessings be upon him, for the children of Israel who are of Hebrew origin, and about 14 million people in the world belong to this religion of different origins. The Jewish religion was not spared from confusion, interpretation, and distortion due to the disturbance of the Jews themselves in their lives, livelihood and behavior, and this disturbance prompted them to adhere to the Jewish religion, which was founded on the fact that God is capable of everything and the creator of everything and is free from any defect, and that he created “Israel” from his offspring. Abraham, peace and blessings be upon him, in order to form his chosen people, and he sent down his law to Moses to lead these people to their fulfillment, according to their claim. The Jews also believe that God made a covenant with Abraham by blessing him and his descendants because they worshiped him and remained faithful to his worship, and that that covenant was renewed with Isaac and Jacob, who is also known as Israel, and his sons were named after him, the Children of Israel or the Israelites, and God later revealed to the Children of Israel through Moses, peace be upon him, the commandments Ten and laws that show them how to live their lives and build their society.. The Jews call themselves “God’s Chosen People,” meaning the one chosen by God - they claim - to perform certain duties and bear special responsibilities such as establishing a just society and worshiping the one God. At the same time, it places them accountable for their sins and shortcomings. The rabbis of the Jews “singular rabbi, a title held by a Jewish clergyman” imposed many rules, laws and prohibitions on their followers that are difficult to transcend, with the aim of reminding the Jews of their separation and distinction from other human beings, which led to the mockery of others, and deepening the character of isolation from them.

The writer notes what he called the false sense of superiority, and says: The Jews claim that they depend in their legislation, worship and behavior on what came in the Torah that God Almighty revealed to His Prophet Moses, peace and blessings be upon him. Ten times, and the origin of this word has differed, some of them refer to it as an Arabic origin, and some of them refer to it as a Hebrew origin. Those who referred it to an Arabic origin - including Ibn Manzur and Al-Zamakhshari - believe that the Torah means brightness and light, as the Holy Quran described it in Surat Al Imran: “Indeed, We sent down the Torah in which there is guidance and light. » (Surat Al-Maida, verse 44). It clears up the darkness of misguidance and manifests the truth and the light as a metaphor for eloquence and truth.

And under the title “The Trapped Torah,” he says: The scholars have agreed that the original copy of the Torah, that is, the one that was revealed to Moses, peace and blessings be upon him, as well as the copies of the Old Testament were lost from the hands of the soldiers of Bakhtawar, and when Antiochus, the king of the Franks, opened Jerusalem (Al Kuds) burned all copies The Old Testament ordered the killing of everyone who had a copy of it. The Jews found it an appropriate opportunity to write the Torah again. They deformed the Torah of Moses into a horrible deformation and wrote it again, and filled it with lies that archaeological discoveries began to expose day after day and discredit most of what the Torah came in.

The Holy Qur’an, which falsehood does not come to it from before it or from behind it, confirmed that the deviant Jews had extended their sinful hands to the original Torah, so they altered and distorted for what their demons wanted...

2  The Day of Wrath, by Safar bin Abdul-Rahman al-Hawali

In the year 2000, al-Hawali wrote a treatise on the Second Intifada, entitled "The Day of Wrath". He argued that the Biblical prophecies used by Christian fundamentalists to support the state of Israel actually predict its destruction.

3  Is Judaism a Heavenly Religion?, by Abdul Majeed Hamo

4 - Babylon and the distortion of the Torah, by Abdul Majeed Hamo

5 - Babylon and the distortion of the Torah volume 2,  by Abdul Majeed Hamo

6 - The Canaanites and the Distorted Torah, by Abdul Majeed Hamo

7 - The Message in Sabbatai Zevi and Abdullah ibn Saba, by Ahmed Mahmoud Al-Shorbaji

The Abraham Accords have, so far, cleansed the shelves of the United Arab Emirates, Bahrain, Morocco stands.

By the same token, Syria, Egypt (though at peace with Israel), Lebanon, Iraq etc... have regular displays of antisemitica.

Our findings have led to the Frankfurt Book Fair blacklisting of recidivist publishers of hate.

We will continue to monitor the shelves as hate mongering contravenes the contractual obligations of publishers towards the Fair.

“We hope to see the day that the Fair will be declared hate-free,” concluded Samuels.