Jerusalem-The Simon Wiesenthal Center today publicly criticized Lithuanian Prime Minister Ingrida ŠimonytÄ's statement in response to the recent desecrations of the Ponar Holocaust memorial earlier this month. ŠimonytÄ correctly referred to Ponar, where approximately 70,000 Jews were murdered during the Holocaust, as "one of the most tragic places in Lithuania's history," but failed to mention the highly significant role of Lithuanian collaborators who carried out the majority of the murders, which she attributed to "Nazis and other criminals." 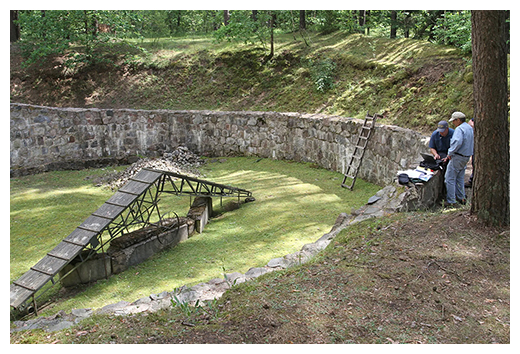 In an op-ed published in The Times of Israel today, the Wiesenthal Center's Director of Eastern European Affairs, Holocaust historian Dr. Efraim Zuroff harshly criticized this extremely important omission which whitewashed the role of the special Lithuanian murder squad, the Ypatinga burys, which killed the majority of the Jews murdered at Ponar.

Photo: Jewish forced laborers dug a tunnel from this holding pit near Vilnius, Lithuania, into the surrounding forest.Credit...Ezra Wolfinger for NOVA

"Is that an accurate description of the tragedy of Ponar? We know who the Nazis were, and we know what role they played in the Final Solution in general, and in Lithuania in particular. But who are these anonymous “other criminals,” who, according to ŠimonytÄ were responsible for the annihilation of 70,000 Jews? Has she never heard of the infamous “Ypatinga burys,” (the special ones), the Lithuanian mass murder squad, one of the worst in the history of the Shoah, who carried out the murders at Ponar? There is no doubt about their role, or for that matter the role of more than 20,000 Lithuanian collaborators who participated in the mass murder of approximately 90 percent of their Jewish fellow citizens."