This Week in Israel, the Wiesenthal Centre Recalled Experts at the World Summit on Counter Terrorism who Assisted in Our Defamation Suit

Paris - In a landmark case, France's Supreme Court exonerated the Simon Wiesenthal Center's Director for International Relations, Dr. Shimon Samuels, of charges of "conspiracy to defame" brought by The Committee for Welfare and Aid to the Palestinians (CBSP).

This judgment ended a five year series of lawsuits in French Courts suing Dr. Samuels for writing “[through the] CBSP, a French organization that funds terrorism and which was banned in the United States.'' The umbrella UOIF raises funds for the families of Hamas suicide terrorists, a campaign masked under the slogan - 'For just 50 euros, you can sponsor an orphan in Palestine'."

The Supreme Court found "...it had been shown that the goal being pursued was legitimate and that the defendant could not be accused of harboring personal animosity against the CBSP..."â¨â¨The Supreme Court ruling stated further that, "...based on the large number of exhibits produced by Stanley [Shimon] Samuels and which formed the basis of his conviction, the investigation was thorough "and "...the court found that it had been repeatedly reaffirmed that since December 27, 2001 and September 12, 2003, Hamas has been considered a terrorist organization as defined in EU legislation and in French law..." and "...the governments of the United States, Australia and Canada, respectively in August, September and November 2003 put the CBSP on the list of organizations 'specifically identified with global terrorists; that ''the U.S. State Department therefore froze the organization’s assets"; and that "it has not been disputed that starting in August 2003 the Central Bank of Lebanon questioned private banks about organizations tied to Hamas, among which the CBSP was cited."â¨â¨The Court's ruling found that the Wiesenthal Centre "press release was backed by a report that was forwarded to the [French} Interior Minister, which denounced, among other things, acts of anti-Semitism, UOIF's ties with the Muslim Brothers and Sheik Qaradawi, an ideologue with ties to Hamas, who had authorized 'human bombs'..." and " ...reminded people of the United States government’s decision to freeze the assets of individuals and organizations, including the CBSP... designated as supplying financial support to the terrorist group."â¨â¨"In the final analysis, as Director of International Relations of the Simon Wiesenthal Center Europe, which was founded to combat anti-Semitism throughout the world, Stanley [Shimon] Samuels had information constituting a sufficient factual basis to make the statements in controversy, which, when contextualized, are understood to be a call for the Interior Minister to carry out a wide-scale investigation of the CBSP..." ; "...[these statements] do not overstep the bounds of what is acceptable free speech guaranteed under domestic law and international conventions..."â¨â¨"On these grounds, the Supreme Court, rejects the appeal; and finds inadmissible the motion brought... by Le Comité de bienfaisance et de secours aux palestiniens [The Committee for Welfare and Aid to the Palestinians]...", the Supreme Court's ruling stated.

PHOTO ABOVE: Dr. Samuels, pictured before the opening of the French Appeals Court proceeding.

Those experts present at this year's World Summit, were Brigadier General Yossi Kupervasser, Dr. Lorenzo Vidino of GWU present at the first round, Dr. Matthew Levitt of the Washington Institute for Near East Policy at the second round. The current French Ambassador to Israel was in attendance. 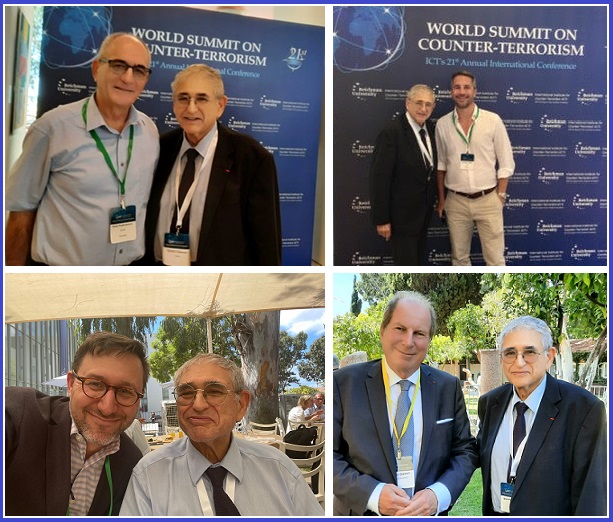 “The French Supreme Court’s decision is a victory for Simon Wiesenthal Center in its world-wide campaign for truth and justice,” said Rabbi Marvin Hier, CEO and Founder of the Centre.